If you are looking for ESIC limit increased to Rs 21000 circular then here you can find all those details. In the year 2016, Employee State Insurance Corporation (ESIC) has increased ESI contribution salary limit to 21000 Rs from 15000 Rs. By this new change in ESI salary limit, there are more than 50 lakhs of new employees were covered under employee state insurance scheme. At present, ESIC is providing medical security to more than 2.5 crores of employees in India.

ESIC limit increased to Rs 21000 circular was released in the year 2016 but the increased ESI contribution salary limit is effective from 1 Jan 2017.

The new ESIC threshold limit has included more than 50 Lakhs of employees in Employee State Insurance Scheme so it will benefit both IPs and family members of insured persons. 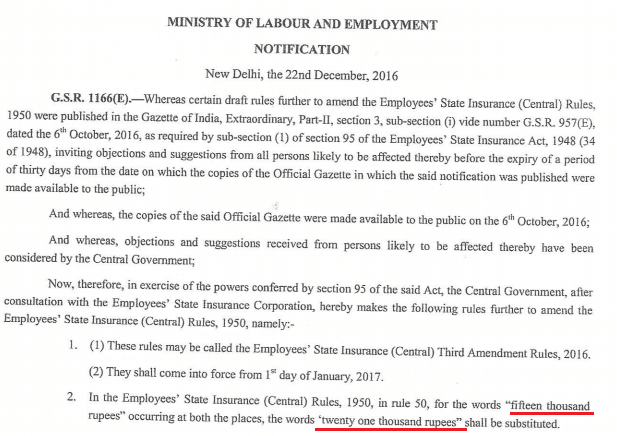 There is another rumour is going on that very soon the Employee State Insurance Corporation is going to increase ESIC salary limit to 25000 Rs. But till now there is no official information about this.

Along ESIC Wage Ceiling From 15000 To 25000 Notification, ESIC has taken some additional employee favoured decisions, once recollect them

ESI scheme is applicable to all the employers who are employing 10 or more than 10 employees. In states of Maharashtra and Chandigarh, this limit is 20 members.